Another very warm sunny day, which again saw a lot of butterflies on the wing with 12 Peacock, a Small Tortoiseshell flying across the cove and a Brimstone flying around Rufus Castle. Not only was the Brimstone my first for the year, but amazingly it was my first on Portland since I moved here in May 2017.

Other highlights were a pair of Blackcaps at the back of the cove where there were also 4 Chiffchaffs.

On the beach, after a long absence there were 3 Rock Pipits and a pair of Pied Wagtails.

Just about everywhere I walked I could hear Wall Lizards scurrying away, but the only one to show itself properly was by the benches by the lookout at Rufus Castle.

A new hoverfly for me today, an Eristalis arbustorum which I came across at the top of the steps by Rufus Castle. 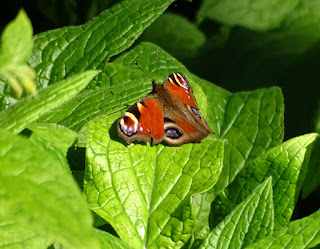 In Penns Wood a Peacock butterfly comes to rest on the leaves of a Russian Comfrey. 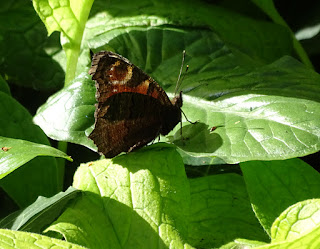 The same butterfly with wings closed. 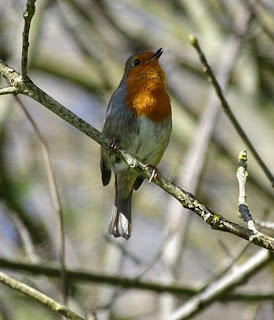 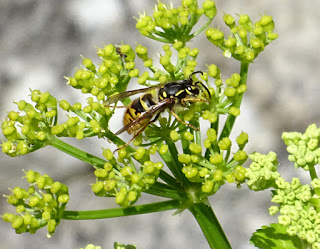 Not sure which wasp species this is. 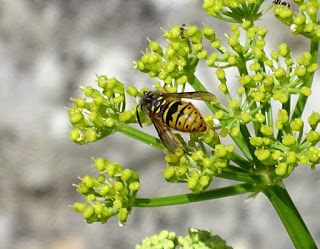 The pattern on the abdomen might help, but a head on shot might have been better. One to ID. 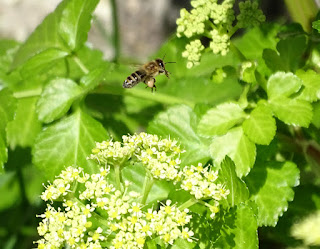 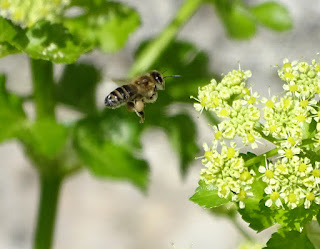 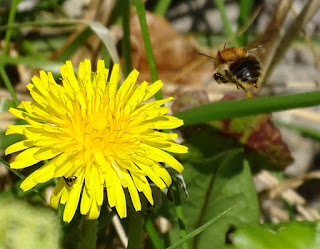 Do you know what I have no idea what species of Bumblebee this is. 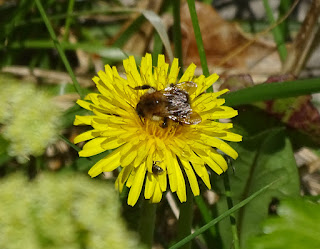 Had it had a white tail I would have said a Tree Bumblebee, Bombus hypnorum. One to ID 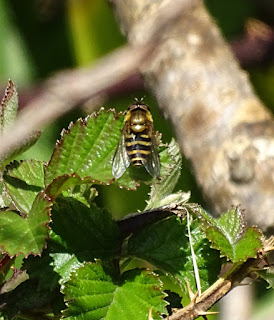 And another to ID a hoverfly possibly one of the Syrphini species. 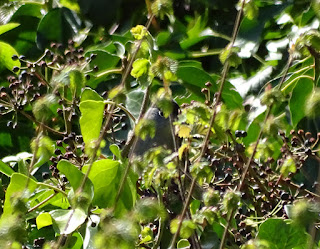 If you look closely you can just make out the black cap of a male Blackcap. 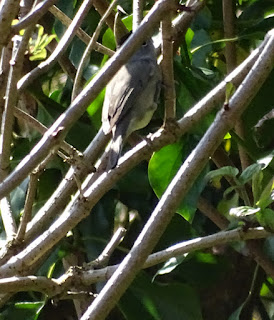 And another snap shot as it disappeared into the bushes. He and a female were at the back of the cove. 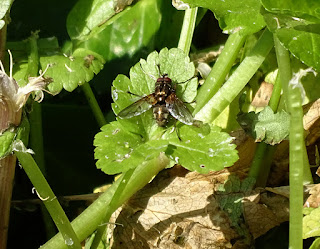 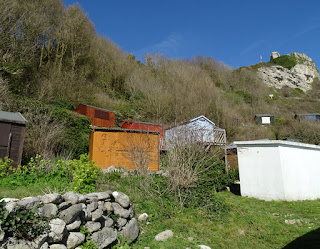 .............and it wasn't alone either with several others around the beach huts at the back of the cove here. 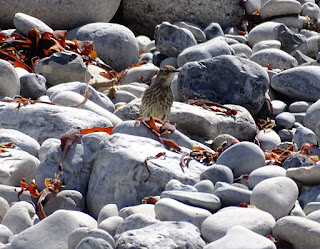 On the beach a Rock Pipit keeps a wary eye on me. There were two others scurrying around the beach picking off the Kelp Flies. 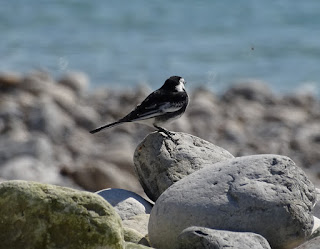 Also on the beach this male Pied Wagtail eyeing up a Kelp Fly in front it. 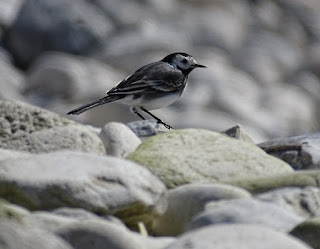 And also a female. 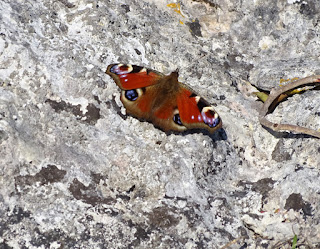 On Penns Weare another Peacock butterfly soaking up the suns rays. 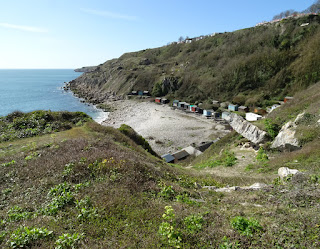 Looking down onto Church Ope Cove from Penns Weare. 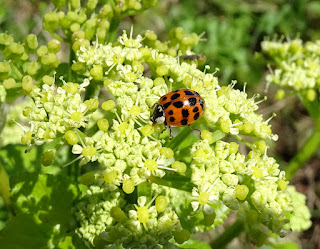 I came across 2 Harlequins today, this one on Penns Weare and another by Rufus Castle. 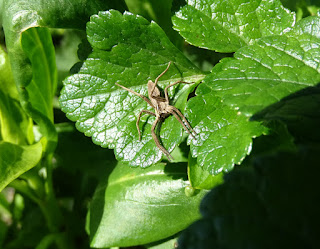 A Nursery Web Spider waits for its prey 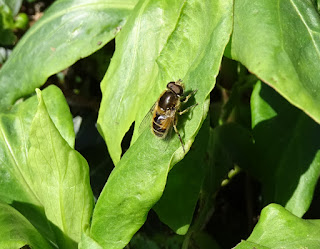 I seem to be doing well today for new species. Either that or my memory is that bad that I can't remember seeing them before. I'm sure I've not come across this before, very similar to a Drone Fly, but half the size. In fact this is a Eristalis arbustorum and definitely a new one for me. 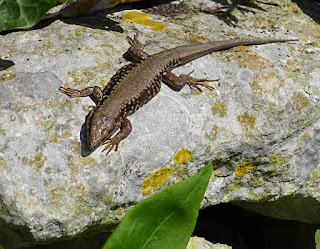 Just the one Wall Lizard seen with dozens of others heard in the undergrowth along my walk. 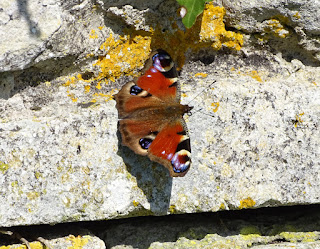 Another Peacock butterfly sunning itself. 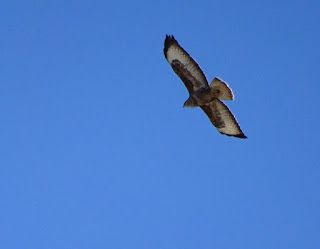 Over Bumpers lane a Buzzard circles. 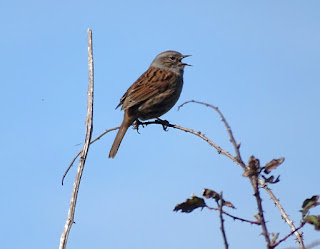 In the lower paddocks a Dunnock in good voice. 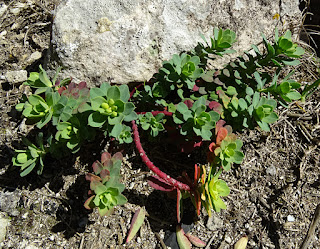 A plant to ID 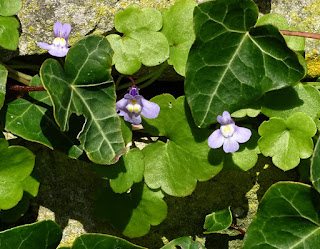 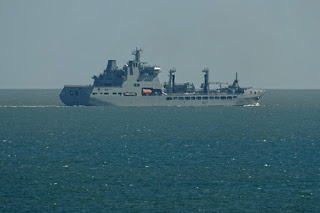 This is the British Replenishment vessel ' RFA Tiderace' out in Weymouth Bay heading east. More on this vessel Here.