I nearly made it back home before another heavy shower hit the island. The showers were pretty heavy today and I guess if I had waited until the afternoon, I might have enjoyed more prolonged spells of sunshine on my exercise walk. Well I didn't and me and Ted got a bit wet.

Not too many birds about and the only migrants I came across were 3 Chiffchaffs, in and around Penns Wood. A Rock Pipit was on the beach and was the first I've seen here for quite sometime.

In the windy damp conditions there weren't too many insects about either. I came across singles of Buff-tailed Bumblebee and Red-tailed Bumblebee, plus a Chequered Hoverfly.

And firsts for the year were a Dark Bush-cricket nymph and a Green-longhorn Moth. Both seen at the back of the cove.

And when I got home there was a Noble False Widow Spider (Steatoda nobilis) in the conservatory.

Here are a few images and a video from today: 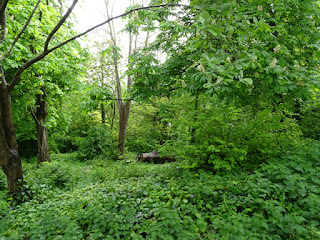 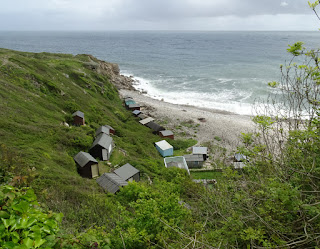 Church Ope Cove with heavy showers out to sea.

Quite rough as well. 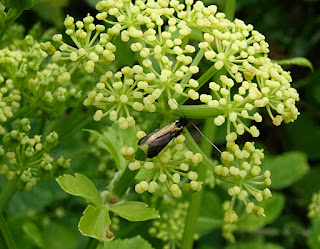 My first Green-longhorn Moth of the year. Normally you would find dozens of these flitting about on the Sycamores. This one was on an Alexanders and quite a distance from any trees. 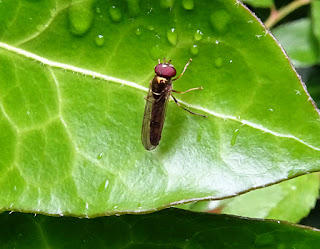 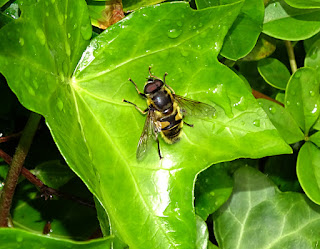 And the only other hoverfly seen was this Dead Head Hoverfly 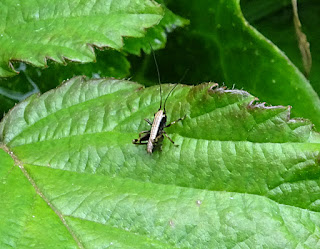 This is the nymph of the Dark Bush-cricket 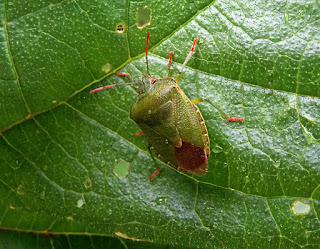 And probably the commonest shieldbug on Portland, a Common Green Shieldbug 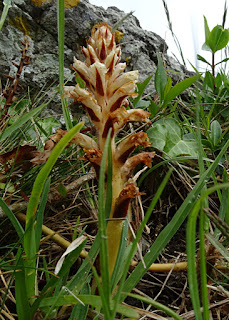 Wherever there is Ivy running across the ground, there is always a good chance to find this parasitic plant called an Ivy Broomrape, Orobanche hederae. 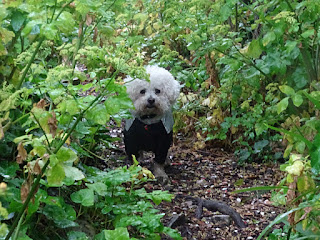 Oh dear, Ted doesn't look too happy, as we tried to take refuge from a heavy shower in Penns Copse. 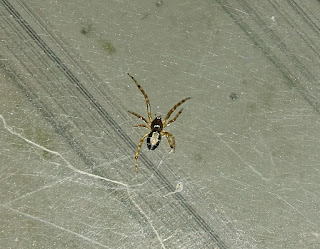 And when I got home and was hanging up my soaking wet jacket, I came across this mini spider in the conservatory, which apparently is a juvenile Noble False Widow Spider (Steatoda nobilis)