Portland Bird Observatory and The Bill

With Storm Jorge hitting our shores this morning, it certainly livened up the sea off Portland Bill and up the east coast. If there were any Purple Sandpipers about I think they probably ended up in Lulworth Cove, it was that windy.

I parked up at the Obs and made my way past the Obs Quarry, where there were 3 male & 1 female Stonechat. From there I headed down through the hut fields towards the Red Crane. The only birds enroute were a couple of Meadow Pipits and a Skylark singing away.

The east coast from the Red Crane down to the Obelisk was pretty impressive as huge waves were crashing in one after the other, sending spray high into the air. On one occasion as I was videoing, I heard a young lad shriek with excitement as a wave hit the rocks behind me. At that moment I just knew I was in for a soaking, and sure enough a huge deluge of spray came right over the cliff and absolutely soaked me.

I wasn't in any danger, but it did make me laugh that on hearing the lad, I knew what was coming.

At the Obelisk it was pretty obvious that there wouldn't be any Purple Sandpipers, especially when wave after wave was crashing into the rocks between the Obelisk and the Pulpit. In fact this is first occasion I have ever seen waves going over the top of The Pulpit.

I really wasn't expecting to see any birds along this stretch, but surprisingly I saw 12 Gannets pass through from west to east, a lone Guillemot, 1 Cormorant and 3 Herring Gull.

In the distance the sky was beginning to blacken as a shower threatened to hit the coast. With the wind speed really picking up, it was a race to get back to the Obs before the heavens opened. I managed it with just minutes to spare before this particularly shower hit the mainland.

Here are a few images and lots of videos from today: 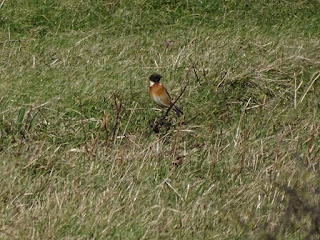 As I was leaving the Obs I came across these 3 Stonechats. This is a male. 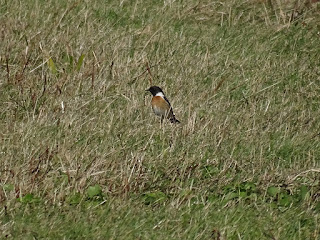 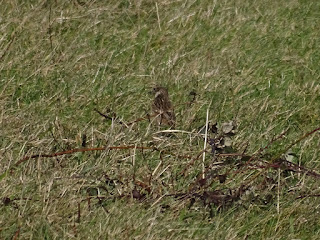 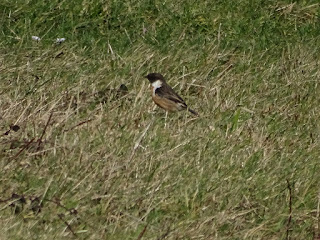 Three of the Stonechats by the Obs Quarry. Two males and the female 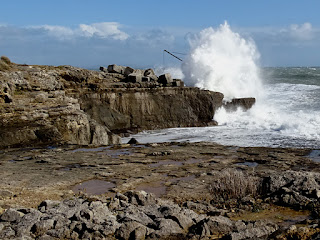 The Red Crane is taking a bashing

And a video following the waves in towards the Red Crane 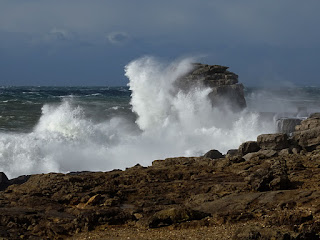 Down at the Pulpit, the waves were even higher.

And here's another wave coming over the top of the Pulpit 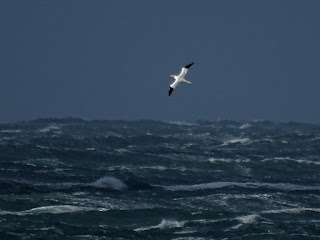 One of the 12 Gannets around The Bill. 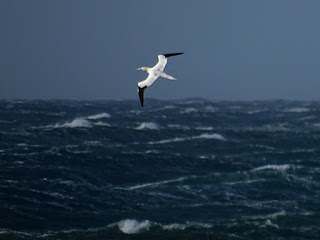 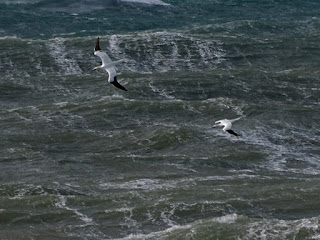 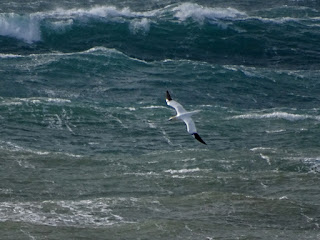 Not brilliant but a short video of the Gannets just off the Pulpit. 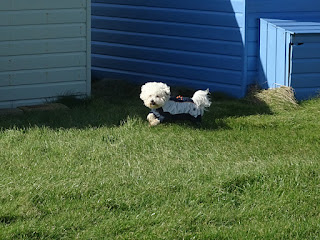 And just as I was about to finish videoing I heard a young lad shout and then next thing I was covered in spray. 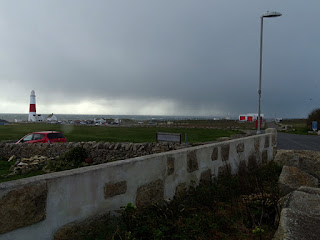 The Storm clouds gather as I headed back very quickly to the car. 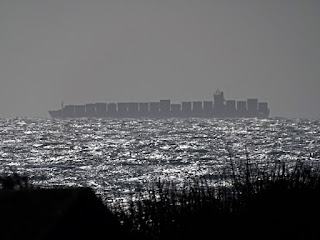 This is the American Container Ship "Maersk Ohio" on its way from Norfolk (South-east Virginia, USA) to Antwerp (Belgium). More on this vessel Here.
Newer Post Older Post Home