This afternoon it was back out in the garden to make the most of the glorious sun. Still lots of bees about with Red Mason Bee (Osmia bicornis) and Early Mining Bee (Andrena haemorrhoa). Plus some new ones for Portland, Red-tailed Bumblebee (Bombus lapidarius), Buff-tailed Bumblebee (Bombus terrestris), Mining Bee (Andrena scotica) and a Leafcutter Bee (Megachile willughbiella).

A Common Wasp was interested in the garden shed and after 4 attempts made its way through a gap at the top of the door. Also new to the garden was a Hoverfly (Epistrophe eligans). There are plenty of these in Pennsylvania Castle Wood, but this is the first one I've seen in the garden.

A Speckled Wood was also a garden first this year, as was a male Orange-tip. Other butterflies recorded were a Large White and Small White.

On the bird front I had my first Greenfinch on this side of the street in Wakeham, all the others have been behind the houses opposite around Perryfields Butterfly reserve. Today's newbie was a female. 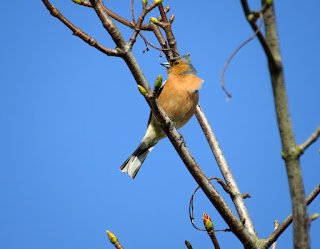 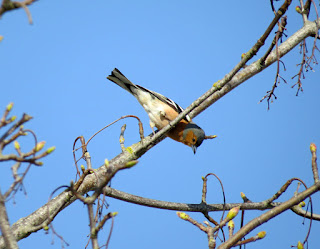 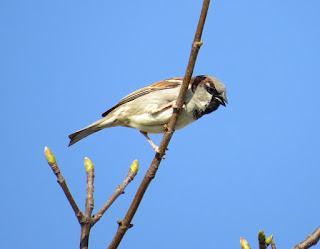 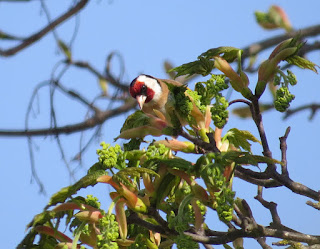 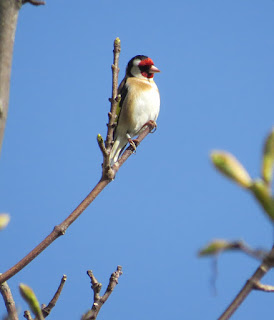 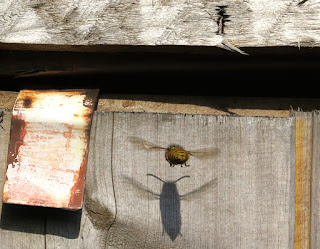 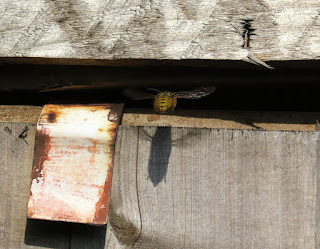 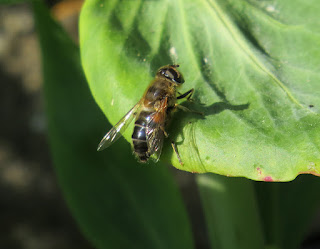 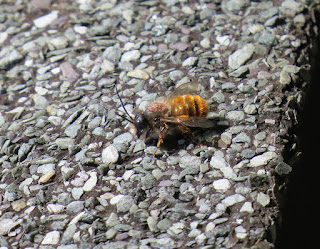 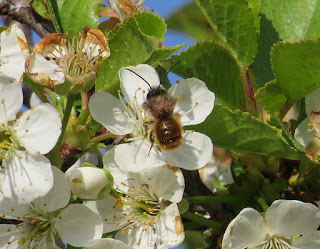 .......this one are all carrying parasites. Red Mason Bees are very efficient at pollinating fruit trees are sometimes introduced to orchards. This one is on the Cherry tree. 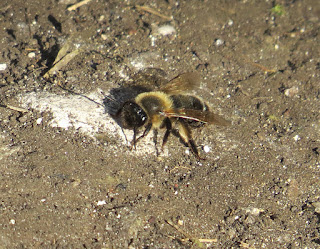 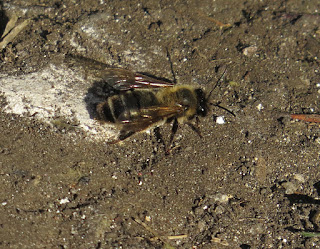 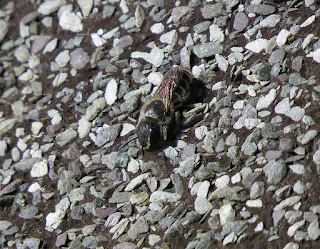 Here's another new one for me a Leafcutter Bee (Megachile willughbiella) 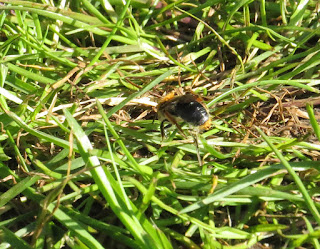 This is an Early Mining Bee (Andrena haemorrhoa)....... 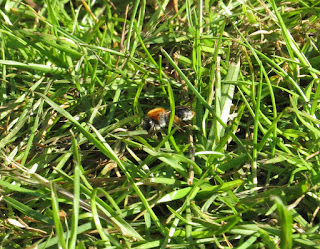 ........which was spending a considerable amount of time running about in the grass. 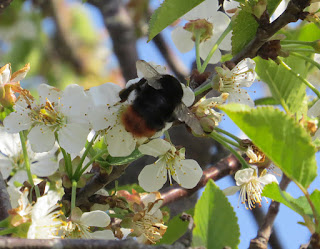 Another new one a Red-tailed Bumblebee (Bombus lapidarius) 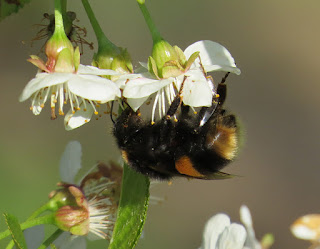 And another newbie, a Buff-tailed Bumblebee (Bombus terrestris) 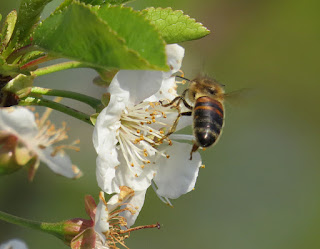 Morning
Early this morning and plenty of activity in the back garden with the tadpoles growing bigger everyday in the garden pond, a few bees and a new hoverfly for my Portland List, a Long Hoverfly (Sphaerophoria scripta).

I also recorded 2 Gooden's Nomad Bees (Nomada goodeniana), a possible male Blue Mason Bee (Osmia caerulescens) and several mining bees which I will have to ID. 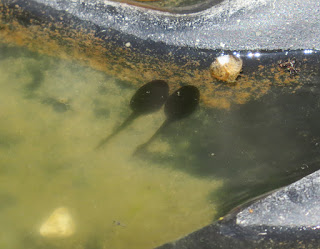 The tadpoles are doing well in the garden pond. 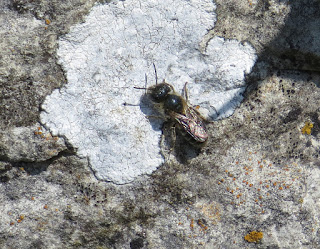 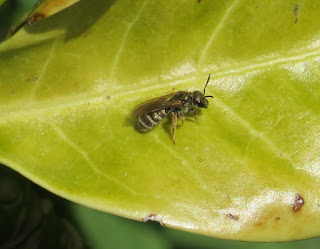 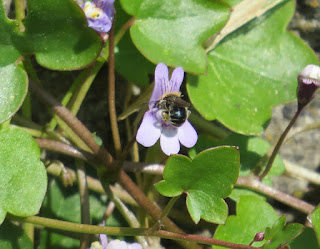 I think this is a male Blue Mason Bee (Osmia caerulescens). However the abdomen should be bronze, so I might have to seek advice on this one. 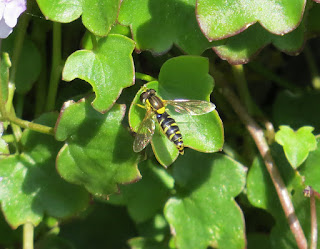 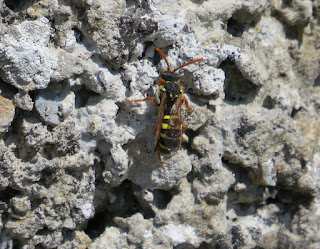 Dropped into Ferrybridge late morning to see if there was anything about. The Little Terns were very active across The Fleet, whilst a few Sandwich Terns were close to the bank I was on. Also about a few Herring Gulls and a very tatty Peacock butterfly.

Here are a few images. 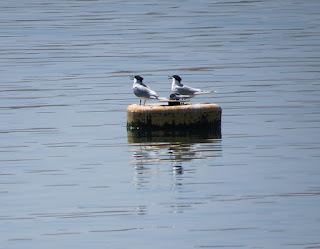 A pair of Sandwich Terns on the moorings. 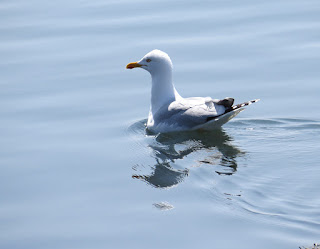 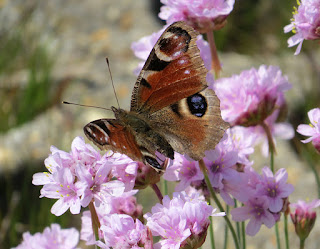 And on the other hand a very tatty Peacock 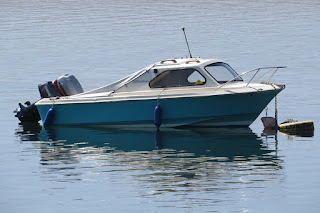 Tiki still bobbing about in the Fleet. 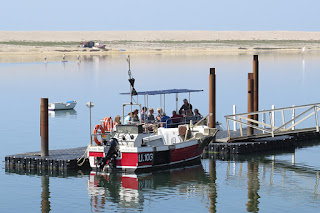